This article was published in the summer 1975 edition of The Triangle, publication of Mu Phi Epsilon. Transcribed by Jonellen (Chandler) Goddard. Original pages are in the possession of Marie (Chandler) Gale.

Sibyl Croley [sic] Hanchett Schneller has a list of accomplishments that seems to show no indication of diminishing. She is a pianist and has been a teacher of music. She is a poet and has written published prose. She has been a composer and is organist for her church. She has done complicated, self designed petit point, and her culinary creativity won her a trip to New York to take part in a Pillsbury Bake-Off contest (she was runner-up for her cashew nut cookie recipe). And a particularly shiny star in achievement crown is her service in the field of brailling. 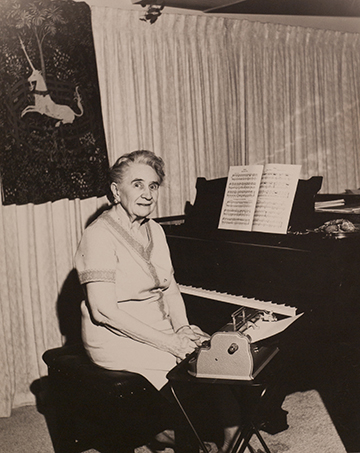 Sibyl, 1963, surrounded by the “Unicorn in Captivity” needlepoint, her grand piano, and braille typewriter.

It is considered impolite to tell a lady’s age. But there comes a time when it may be very complimentary. Sibyl is 87 years young. And just last year she published her first book of poetry.

Sibyl graduated from San Jose Normal, now San Jose State University, with a major in education and minors in music and English. She served on the music faculty there for 17 years, teaching in the music education and piano departments. It was during that period that she became a charter member of Phi Mu chapter.

She raised a family of four children and now enjoys ten grandchildren and (at the last count) fifteen great-grandchildren. She was widowed 28 years ago and moved to Mill Valley to be near her two daughters and families, and she soon affiliated with the San Francisco Alumnae chapter has served at different times as historian, chaplain, warden and chorister. She has been active as a performer (pianist) and accompanist. Sibyl attended National Conventions at Mills College and in Seattle. It was at the latter that Marjorie Sherman, Palo Alto Alumnae, sang several songs composed by Sibyl. She has written a large number of songs, a number of anthems, short piano pieces, and—in the early days of her career—a children’s operetta. Written originally for her children, friends hearing it advised her “to get it published”. Summy Publishers accepted it. While on the San Jose faculty she made arrangements for the woodwind choir and wrote her own text book for her piano classes, which was published by the school.

Sibyl is a devotee of needlework and her specialty has been the difficult and demanding art of petit point. Today, in the main lounge of The Redwoods, a Retirement Center in Mill Valley where she resides, hangs her beautiful and intricate tapestry, “The Captive Unicorn”, of her own original design and done completely in petit point.1 She has used as many as 700 stitches to a square inch in this creation.

It was when the San Francisco Alumnae started a chapter project of learning to braille that Sibyl decided to join this group. She was 75 years old at the time. She commented, “I have been blessed with good eyesight, and I would like to use it in helping those who are not so fortunate.” In the succeeding two years 1964-65, she received certification from the Library of Congress in both literary and music brailling, two different codes. For over a decade she has done extensive transcribing of music for people all over the country on request. Until a year ago she would amass around 300 hours a year in this labor of love.

It is ironic that in the past year her own eyesight has begun to fail, damaged by retinal hemorrhages. Realizing ahead of time this development was inevitable, she put in extra hours of intensive work at the piano memorizing, in particular, a large repertory of church music and nearly 100 hymns so that she could continue to play for her church where she had been organist for a quarter of a century. She continued to play for almost daily after-dinner group singing of old favorites at The Redwoods, and several times monthly with her chapter’s piano group. Her spirit to cope with change refuses defeat.

Also ironically, although she has mastered the skill to transcribe music into braille, she did not learn to “read” it with her fingers, and she feels it is a little too late to do that now. She made a start at it, but her arthritic fingers were no longer capable of the sensitivity needed to “read” the raised configuration. Her memory and her ear are excellent, however, and she has discovered TALKING BOOKS for her “reading” books. On the phone she will say, “Just a minute, please, ’til I turn off my book.” She also uses a tape recorder in transcribing continuing literary efforts. At present she is preparing a second book of poems and also working on her own early life for her children.

This most recent creative offering, A Square Inch of Space, 65 selected poems, is a delightful collection of poetry in a wide range of themes, and it spans a period of half a century of writing. It is dedicated to Mu Phi Epsilon. Book shelf reviewer Trudi Sorensen says, “In a world where superficiality seems to reign; where faith, sincerity, and religious piety fights a sometimes losing battle; Sibyl Schneller, with poetry that runs the gamut from the frivolous to the profound, revitalizes us in ‘the long slow toil toward being human.’ ” The title of the book comes from a poem quote, “Within a square inch of space, a woman may travel widely, leaving imperishable tracks.” The lines apply to Sibyl’s own philosophy and life pattern.

In answer to a reporter’s query recently she said, “I would choose versatility for a child. A variety of interests makes life more fun.” She is a lady who practices what she advises.

Somehow it is difficult to picture Sibyl posing for a living portrait of Whistler’s little old mother. Her energy waves would break the frame.