This article was published in the San Francisco Chronicle, March 8, 1979. Written by Blake Green. Transcribed by Jonellen (Chandler) Goddard. An original copy of the article is in the possession of Marie (Chandler) Gale.

When all the world pronounce me dead,
This vehicle to dust returning,
May I be one of whom it’s said:
She learned and will continue learning.

— from “When One Book Closes,” by Sibyl Schneller 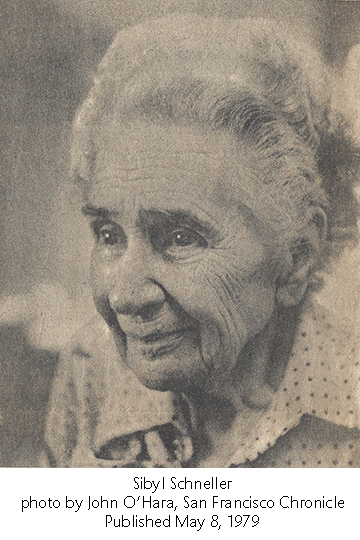 If Sibyl Schneller had been born on either February 28 or March 1, she would have celebrated her 91st birthday last week. As it was, is and has been for the past three years, she is still 21.

Remarkable – that’s what people are constantly saying about Sibyl Schneller. The peculiarities of her age, however, don’t happen to be the reason. She’d be remarkable at any age.

Having been born on Leap Year Day, there’ll be a party in her honor next year when she’s 22. Those of you who get a charge out of tripping up the mathematical dimwits in the newspaper profession have no doubt already divided 92 by four and discovered that—ah ha!—the answer is 23.

Perhaps the most important thing you can learn from her, however, is that whatever age you are, the past, while inevitably the biggest, is still only a part of your life. “Even being old is something of a new experience,” as Schneller sees it.

Sibyl Schneller is a fragile looking woman who has outlived four of her five children, the two men to whom she was married, her contemporaries and most of her eyesight. But she has also, she says, “outlived a good many things” that she may be just as well off without.

“The choices are fewer,” she says, “but so are the temptations. I’m less emotional than I was, and kinder.” Even the deterioration of her eyesight, while a “considerable nuisance,” hasn’t been a completely negative experience.

First the Pollyanna-ish reasoning. “I still see so much better than so many people.” Then the practical one: since she can’t see, her remarkable memory has probably improved. “I cultivate it, pay attention more. When someone tells me a telephone number, I relate it to thee tones in the musical scale to fasten it to my mind.”

“I also think I was a bit too independent,” Schneller says. “Too bent on having my own way. I wrote a little verse about that: ‘Too Late Smart’.”

Sibyl Schneller has also written a great many other verses about life’s experiences, by no means all of them about growing old. She offers a folded sheet of paper and requests that her poem, “Ordeal at Dawn” which last year won a prize in the Contra Costa county fair’s poetry competition, be read aloud. Asked what had been responsible for its creation, she replies in an isn’t it obvious tone of voice, “an illicit love affair.”

Even when the poems are about experiences shared in living in The Redwoods retirement community in Mill Valley, as she has been since 1972, the themes are not what one might expect; “One of Life’s Moments,” a poem in a recently published collection of her most recent work, “Mock Us Gently,” concerns the subtleties of a situation in which someone has just noisily passed gas. Baron Wolman, the publisher of the book has admitted that “I thought it would be old lady poetry … (but) the poems were written by a real live person who happens to be in an old body.”

Sibyl Schneller wrote her first poem – “putting words together” as she calls it – when she was 7, “for my sister who was getting married.” While she had a novel, “Late Harvest,” published in 1937 (“it didn’t make any splash”), a large chunk of her adult life was spent as a teacher, a career that took her from the little school in Nicasio to San Jose State and later to private piano lessons. It was not until 1974 that “A Square Inch of Space,” her first collection of poems was published.

“I didn’t aim at being a poet,” she says. “I never thought of calling myself that for a long, long time.” A poet, by her definition, is “one who observes things and analyzes always with feeling for the melody and rhythm.”

Her daughter, Hilda Fourman of Bolinas, is also a poet, but “she writes more objectively than I do . . . about the world in general: ecology and environment.” Reminded that, by its very nature, poetry probably can’t help but be subjective, she corrects herself: “She writes subjectively about objective things.”

For the last ten years, since she retired from teaching piano except for “a special pupil,” Ivory Jackson, a young man who works at the retirement center, Schneller has concentrated on her poetry. “I think them out in the middle of the night. Then I write them down in very large script that I can read. Later I type them,” on an antique Remington portable “that I’ve had for about forty years and it wasn’t new when I got it.”

Robert Frost is Schneller’s favorite poet: “I like his honesty and his clean-cut writing. I think there’s far too much padding in most poetry.

“I used to write about love and religion,” she continues, ”but now mostly love,” although she completed a collection of eight long narrative poems about women in the Bible that is ”loafing around at the publishers.”

While Schneller says she is still “not very religious, just a student of the Bible,” she also says that “I think more about those things now. But I always thought about them.”

“When I was a child there was a powdered poison for rodents called Paris Green. I asked my mother if I ate enough Paris Green, would I go to heaven. She told me that if you go without an invitation, you will not be let in. After that I never thought about suicide.”

Recently Schneller dressed up in a floral print dress with a rose corsage pinned on her shoulder, recited her poems and played requests on the piano for patients at Laguna Honda Hospital. It was the first time she had done something of this sort and, she admitted she was nervous. “Then I asked myself, ‘what’s the worst that can happen to you: give a program and everyone would walk out.’ Considering the audience, that, of course would have been impossible. However, many of the patients listened carefully, chuckling appreciatively at lines that obviously touched chords in their own lives.

There was, for instance, a poem about dressing up for “a date” with Lawrence Welk, another about playing solitaire. “I happen to think that anyone one who interferes with your solitaire game is the lowest of mankind,” the poet says.

The game is part of her own daily routine. After she makes herself breakfast in her tiny kitchenette (the only thing the one-time Pillsbury Bake-Off runner-up – “for my cashew nut cookies – prepares for herself “except for my beer bread”), “I play (cards) for quite awhile. It keeps me occupied so I can get my physical needs attended to before I get dressed.”

Another regular part of the day is her background music “recital” at dinnertime for residents of The Redwoods. The other evening, sharply at 5:40, Sibyl Schneller got up from her chair, smoothed her hair, locked the door to her room and, steadying herself on the rail that runs along the wall of the hallway, made her way to the dining room. She sat down at the piano, a tiny, stooped figure, blue-veined hands with gnarled fingers ready at the keys, house-slippered feet at the pedals.

“I don’t know anything later than Prokofiev (the Russian composer who died in 1953),” she says, and the songs she plays for dining are certainly oldies-but-goodies. That night she started with “Old Black Joe”: “Gone are the days when my heart was young and gay . . . “

It happens, of course, that Sibyl Schneller doesn’t feel that way. “I’ve been old for a very long time,” she says, “but I’m having so much fun, I’d like to stick around awhile longer.”