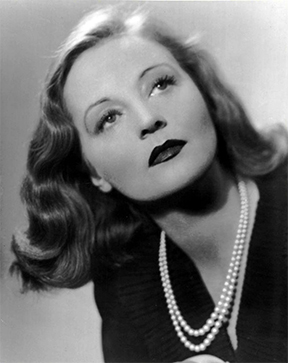 Tallulah Bankhead (1902-1968) was an actress of stage, screen and radio from the 1930’s and on.  Her first film was Tarnished Lady, directed by George Cukor; her last televised appearance was in May, 1968 when she helped interview John Lennon and Paul McCartney on the Tonight Show. In between, she starred in  Alfred Hitchcock’s Lifeboat, won Variety Award for Best Acress of the Year for her stage role in Little Foxes, and even had a guest appearance on The Lucy-Desi Comedy Hour in 19571.

In 1949, Proctor and Gamble launched a new radio campaign to promote Prell shampoo, introducing “Tallulah the Tube” singing a classic advertising jingle.  The actress Tallulah felt her first name was unique and deeply resented being identified with a singing tube of shampoo. She believed  the character was created and designed in her image and as a result she was distressed, humiliated, and exposed to public ridicule and contempt. She sued Proctor and Gamble, CBS Radio Network, NBC Radio Network and Benton & Bowles (an advertising agency)  for $1 million.  The suit generated significant press at the time, including a several page spread in Life Magazine (which heavily sided with their advertiser, Proctor and Gamble).

Our Sibyl seemed to find that Tallulah had right on her side, and apparently wrote her to say so.  While we don’t have the letter that Sibyl sent, Sibyl did keep Tallulah’s response from April 12, 1949  written on Hotel Elysee letterhead and with her original signature. 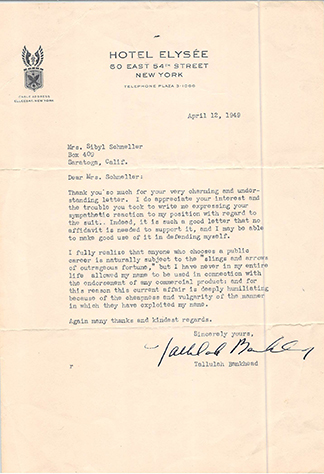 For easier reading, the text of the letter is transcribed below:

Thank you so much for your very charming and understanding letter.   I do appreciate your interest and the trouble you took to write me expressing your sympathetic reaction to my position with regard to the suit.   Indeed it is needed to support it, and I may be able to make good use of it in defending myself.

I fully realize that anyone who chooses a public career is naturally subject to the “slings and arrows of outrageous fortune,” but I have never in my entire life allowed my name to be used in connection with the endorsement of any commercial product: and for this reason this current affair is deeply humiliating because of the cheapness and vulgarity of the manner in which they are exploiting my name.

Again many thanks and kindest regards.

Tallulah’s lawsuit was ultimately settled out of court. “Tallulah the Tube” continued to sell Prell for about a year, when she was replaced by the next Prell ad campaign.