To proceed with the living-room — which I am describing in much detail because it is rather more of an index to our habits than people’s living rooms usually are, and we seem to have a good many habits — on either side of the fireplace is a bookcase. One is of bird’s-eye maple, with cherry shelves. My father, your g.g.g father selected the tree, made the lumber in his mill, and made the bookcase before I was born. One of my earliest memories is of the figured flannelette curtain (that sounds funny now) which used to hang in front of it. When I was about nine years old I used to be afraid to touch the second shelf because there was a little copy of “The Vision of Sir Launfal” which, in case you don’t know, is a poem by James Russell Lowell. It has something in it about a leper and I had a notion that one could get leprosy by even touching the book that had that word in it. I must have been a neurotic child. Since that time I have achieved some conformity, but there must still be something queer about a woman of forty-three who can entertain with gusto the idea of writing to her remote posterity. 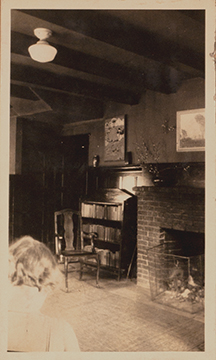 Well, the point of departure was, I perceive, the maple bookcase. Furniture is so much more than furniture when one has used it for thirty-five years. The top shelf contains red and blue books. Don’t jump to the conclusion that books mean nothing but color effects to your ancestors, but I have arranged this particular shelf together with a blue vase which stands on top, with a needlepoint tapestry in predominating blues which hangs above. The vase will hardly survive to your day, short of a miracle, but a poor old faded tapestry may be intact. I made it about four years ago and the colors are more vigorous now than they will be after half a century of sunlight. There is another tapestry, which will probably be less durable, in silk. I have another wool one started, but they take a lot of eyesight, and either energy or leisure, so it is in obeisance until I am less actively employed than at present.

On the opposite side of the fireplace is another bookcase, which was made by your g.g.father before we were married. It is filled chiefly with sets of books — juvenile encyclopedias which an agent persuaded me to buy before I became agent-proof, and a set of big red books called the “Universal Anthology” which represents a similar early indiscretion on the part of your g.g.father. One shelf is filled with books which are the spoils of two different poetry contests. Perhaps the “Percy’s Reliques”, in four small volumes and the first edition of Bryant’s “Iliad” in two volumes will still be in the family your day. They should be precious by that time. My set of Thackeray is a pleasure to me. Not many people have a taste for Thackeray or leisure to read him nowadays.

On top of this case is a row of bright colored books supported by redwood burled bookends, a gift, of course, and on the wall above is an embroidered picture which is perhaps not very artistic, but I had a good deal of fun doing it, and it inspired a set of seven poems called “Tapestry”. These poems swelled appreciatively the volume of your ancestress’s published works. I see I shall have to append a number of these to the present chronicle. My plans seem to expand as I go along.

Over the mantle is a violent batik design in mild colors, of a terrifyingly, branchy cat and an octopus-like chrysanthemum, executed by your grandmother, or great-aunt, Barbara, at the age of sixteen.

In the corner, on the other side of my bedroom door, is another bookcase full of my pet books, and a hard-working piano stands in the opposite corner. It is a Wellington, with a dark mahogany case and a pleasant little tone. Most of my serious practising is done at school, on a heavier piano. Perhaps I should mention that I teach piano at the State College in San Jose. The wage — or salary — earing mothers, I understand, are getting to be a problem, social and economic. I am sorry to add to the complications of society, but it seems to work out fairly well in this case, though I admit the case is an exception. My work has been of a sort which would bear the interruption of small children, and it has taken me with them into school, rather than away from them. Anyhow, I am a very casual housekeeper and a fairly earnest teacher — I am probably happier this way.