Writing piecemeal, as I am doing, I can only hand you fragments of whatever may happen to be uppermost in my nineteen hundred thirty-one brain. This particular fragment concerns an evening spent by the Family in the most approved domestic fashion. Ned says, “Mother, the way you are writing this, they will think we lived fifty years before we did.” Indeed, it seems to me that the note of modernity so stressed in contemporary literature, is but faintly echoed at times in our family life. However exceptional we are, I can not say, but it seems to me probable that there are still many people who live without radios, without liquor, and without large quantities of jazz, and make very little noise about it. All this as a disarming preliminary —

Picture us gathered in a semi-circle around the fire; myself, the two sons and two daughters, Bill — a neighbor boy, Dennet, and blind Grace with her Braille book to which she pays very little attention on this occasion. Billy is entertaining and educating himself at the shame time by asking all the rest of us questions in geography. We answer and turn about keeping score for the number of correct answers. This ancestress make a very low score, having neglected geography in her early youth as purposefully as if she had known that the war would remake all maps and scrap as obsolete most of her hardly acquired information. Bill, who studies geography in college, had quite the best of the game, but the thing was no sooner organized to the point where the more impulsive members of the party had learned to restrain themselves from shouting the correct answer out of turn, when we abandoned this passtime for another.

Barbara, with a yard stick told us to guess a certain number of inches which we measured off with our hands. The prize for the highest score was self-approval.

Then we played Twenty Questions, but there is no point in my telling you just how that is played. The thirster for information is privileged to consult library files. The point is that we really enjoyed it, though I cannot say that any of us would care to spend all of our evenings that way.

After the party broke up, Ned and I watched the fire burn out, which took some time, while we discussed affairs of state. We settled among other things that [the] United States was badly in need of a dictator and decided, quite to our own satisfaction, that there ain’t no such thing as a democracy, and if there is, it is a flop.

The next evening was also in its way interesting. Four women, college teachers and friends of mine, came by express invitation to gossip about the thirteenth century. Life, I find, is too short for me to hunt in books the information I desire about the middle ages. Specifically, the point of interest is the Children’s Crusades. If I live and don’t change my mind and dare to take the time — oh, a hundred ifs, I shall sometime write a book with the Children’s Crusades as the central theme. Pursuant to this end, I pick the brains of those whose business it is to read the books. It is, I think, a fascinating pursuit to try to reconstruct the life of past times, not as histories do it, in terms of war and politics, but colored with the romantic imagination. As a friend of mine once said when asked if a story of hers was based on fact, “It is basted [sic] on facts. In cases where the facts prove inaccessible, there is the satisfaction in being assured that the imagination may have free scope.” The mere lapse of time is productive of a glamour comparable to the beautiful blurring of a photograph that is slightly out of focus. It is some of this glamour that I shall, if I am in any degree successful, get on paper in that projected story. I think anyone who attempts to write creatively is forced to choose his public. The happy thing is to be satisfied with that audience, however small, that is tuned to one’s wave length. 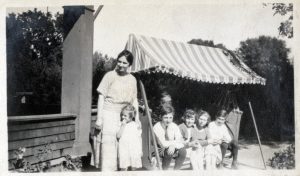