It has long been the intention in the family to keep a record of the sayings and doings of our Baby Sibyl. This undertaking was somehow tacitly delegated to her Mamma as the proper one, but her time seemed to be so taken up taking care of her Baby that she found little time to write. Her “Mamma” was never very enthusiastic on the subject of the record anyhow. I think the idea originated with Mrs. Morehouse of Big Rapids, Mich, President of 9th Congressional Disctict of CTW of Michigan. And so, without any consultation or advice about it, I, Jas Croly, Sibyl’s father, commence this record. I do not know how complete it will be. I have not the least idea that it will be interesting to any one but myself and can only promise that it will be truthful. The first item of interest to record is the fact that she, Sibyl Mary Croly, was born in the morning of the 29th day of February 1888. The news was announced to me by a note from Mary I. Dennett, my step-daughter, stating that the Baby was born and was a “black haired little girl.” 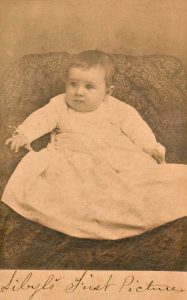 I think the first thing we noticed in Sibyl as being at all worthy of remark was a very decided expression of preference for a certain tune. It was an old Millerite Hymn commencing, “The morning light is breaking,” and the tune, “Webb” in “B flat.” I used to sing it to her while holding and rocking her and before she was two months old, she would, by little greetings and nestlings tease me to sing, and as soon as I commenced, she would break out into a smile, and become quiet. It seemed to us so impossible that we tried it, and noticed the effect at a great many times, in order that we might be fully assured of the fact. When she was less than 4 months old, she would become so excited on hearing her mother and Aunt Nellie sing “Rock of Ages” as a two part song, that she would cry and sob as if her little heart would break, and they would be obliged to stop singing or my Baby would have to be taken from the room.

[Sibyl became an excellent pianist and taught piano for over 70 years, including as a teacher at San Jose State in the 1920’s & 1930’s. In her later years, when she knew she was losing her eyesight, she spent 6 hours a day memorizing all types of music. For the remaining years of her life she could play nearly any classic piano piece, any popular song from 1920 – 1960, and all the hymns from her church from memory.]

2 Comments on “The Record of Little Sibyl (part 1)”