At this age she talked a great deal and was very observant. One day as I was holding her, she put her hand up to my face and gently patting my cheek said, “Poor Papa.” In a pitying caressing tone, then she said, “Papa’s hair,” “Papa’s ears,” “Papa’s eyes,” and suddenly her face all lighted up with enthusiasm. She exclaimed, “The Baby, the Baby, the Baby,” meaning that she saw her own reflection in my eyes.

She would call her sister to “Come to breakfast” and at the table would go over the bill of fare, indicating her preferences by saying “toast,” “bread & butter,” “oatmeal,” “potato,” maccaroni,” “boiled egg,” “more drink of water,” and usually wound up saying, “Pickles good for the Baby – no.” 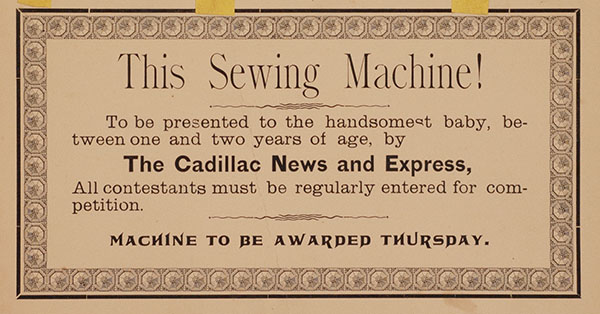 At this time, the Wexford Co. Agricultural Fair was held (Oct 1-2 & 3, 1889) and the publisher of one of the city papers (News & Express) offered a prize of a sewing machng to the handsomest baby. Three babies were entered and the prize was awarded to Sibyl. Such cheering! The women waved their handkerchiefs and men their hats. Ladies crowded each other to get the Baby and girls begged for the privilege of kissing her. One old lady, who wanted to say something kind, told everybody who would listen to her that the Baby was “just the living picter [sic] of Alma Eddy, my grandchild.”

A few days after the fair, at dinner she was not making a success of eating with “Sibyl’s own fork,” as she called it and Mamma undertook to show her how to manage, when she quietly laid down her fork, and taking hold of Mamma’s hand gently pushed it away saying, “Mamma eat her ‘bekfast’,” with a look which said plainly, “You will have better times if you attend to your own affairs.”

Her aptitude for learning was a constant surprise to us all. Mamma used to sing songs to her as well all did and she would soon learn them. One song,

“Baby Bye
Theres a fly
We will watch him, you and I
How he crawls,
On the walls
Yet he never falls”

She would repeat it like this, “Baby bye, Fly, Watch him you and I, he crawls, on walls, never falls.”