In September, 1888, the W. Christian Temperance Unions of the 9th Cong. Dist. of Michigan, held a Convention at Evart, Mich, and as Mrs. Croly was a Delegate, Sibyl was taken along, of course. The Baby attracted so much attention that it was unanimously resolved to make her a Delegate or Honorary Member or something, and a great ado was made over her. She was publicly decorated with the white ribbon, prayers were offered, and the mother took the Kindergarten Mother’s bow, the full particulars of which, behold they are written in the Cadillac “News” of that date. For myself, I was very much affected. In a general way I don’t go much on Church Mummery, but the consideration of that Baby by the best women of this great state, such a setting apart of her dear life to the good work of the Good Master, is to my mind a grander thing in the Sight of Angels and Good Men, than all the palaver of greasy priests from Alexander Borgia to Beecher. 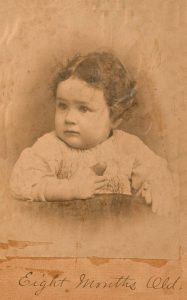 At about the age of 8 months, Sibyl had quite a little repertoire of words. She could say “Papa,” “Kitty,” “Bye” for “Good Bye,” “Sister,” and at 10 months of age she had added to the above her own name of Sibyl, calling it “Tibble”, “Baby,” and when she heard the train going by the house, would somewhat hesitatingly say “Tars” for cars. Although she was a very strong vigorous baby, yet she was backward about creeping, and walking, in fact she was not a really successful creeper till she was eleven months old.

At 13 months of age she could walk and was quite a little talker, and had a very firm conviction in her mind that the men folks of her family were there mostly for the purpose of waiting on her, and to sympatize [sic] with her when Mamma or Sister reproved her. Her sensitiveness to sweet sounds seemed to increase with her growth. The striking of the clocks in a jeweler’s store affected her to tears, without any apparent fear. And when a sweet toned violin was played along with the piano, she was agitated in much the same way and when she heard the clocks strike or the soprano and alto voices on a slow tune.

At 14 months she was taken by her mother on a visit to Baraboo, Wisconsin, and her mother wrote home to us that Sibyl’s cheerful, chummy little ways had made for her friends on the cars and steamboats and attracted general notice. She would electrify her new found acquaintances by suddenly telling them to “Shut up” or “Tut up” as she said it, which was meant by her for a joke instead of impudence.