I have come across this book in looking over Sibyl’s desk. It is a long time since I wrote in it last. Many changes in our family life have occurred since then. My dear wife, Sibyl’s mother, died two years ago, one year before she graduated form the state Normal School at San Jose, thus depriving our dear girl of the benefit of her wise cousel and instruction. For it is a liberal education in itself for a young girl to have such a mother as Sibyl had; so wise, so gentle and so intelligent. Her death was a great blow to me, but with the lapse of time I am becoming more tranquil, the more because Sibyl is such a comfort to me. She is the dearest girl. In goodness, in intelligence, in beauty and in gentleness, she is fulfilling the early promise of her childhood. I want to record this tribute of love and respect in this little book of hers now while I have an opportunity.

I am (72) years old, and in the nature of things I cannot possibly be with her many more years, although my health is good, and I am as vigorous as many a man of fifty, there is not for me any large expectation of life. I would like to live a few years longer though, if I can, and retain my facilities and usefulness. For in the years immediately in front of us, great things are about to occur and I would like to see some of them.

Among other things, the time of the great trouble foretold by Daniel the Prophet, “Such as never was since there was a nation,” is, I think, near at hand as a preparatory to a general readjustment of the social, political, financial and economic conditions of the world on the basis of justice and righteousness. I am led to this conclusion as an observer of present conditions. There is a general feeling of unrest among men, a fearful looking forward to “the things that are coming upon the Earth,” “the sea and the waves roaring, men’s hearts failing them for fear.” Then again, there are prophecies of the restoration of the scattered Israelites to their own land of Palestine, which I think are very near fulfillment. I am not particularly anxious to find any additional trouble, but an event of such importance as that will be worth knowing something about.

I don’t know when these great things will transpire, but some of my friends think that within five years we will see the beginning of the end of this stage of the world’s history and within fifteen (15) years will be its accomplishment.

And more than all else, I want to see my dearest girl happy and settled in her own home and family. She is teaching now, but probably this will be her last term. “Bless her little heart.” May continual happiness and love crown her life. 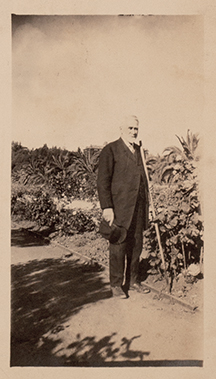