I think it was when she was about 6 months old that Sibyl learned to notice anything that had a pendulum like motion and she always called any swinging thing “Tic Tac.” She learned this from her kindergarten balls.

She also learned another thing in classification at the same time, that is, any round thing, as a small stone, or marble, or lump of clay, was a ball, and any thing of similar shape, not a pleasing color, she called “dirty ball.”

I mention this to explain about what seemed to us a very marvelous discovery she made at this time (20 months old). One evening in Nov 1889, as she was being rocked in Mamma’s arms before going to bed, the moon rose. When Sibyl called Mamma’s attention to it, by saying “Moon. Moon.” “TicTac” “Tic Tac,” and as the moon came more fully into view over the crest of the hill, she said “Ball, ball,” on account of its roundness. 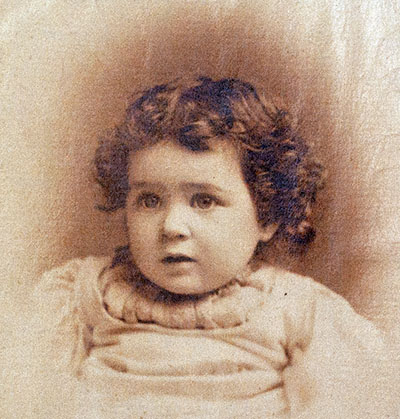 There is nothing very remarkable to record about the Baby at this age. She became about this time to make use of her pronouns, my & mine, very correctly. As for instance one time her Mamma refused her something she wanted, or reproved her for something she did, she said, “I’ll fall down and bump her head.” So she carefully laid down and gave her head a gentle tap or two on the carpet.

She would at this age put her two hands together and make a picture on the wall after the lamp was lighted at night.